A Jolly Fine Bunch of People!

The Rat Roadshow is a title given to a group of people who used to (and often still do!), pursue British Rail Sulzer Type 2 diesel locomotives all over the British Isles.

Not a case of spotting numbers I'll have you know dear visitor, but a quest to travel for as many miles as possible on trains hauled by these little engines, mainly of the Class 25 variant. Enthusiasts dubbed the 25s "rats", for reasons now lost in the mists of time.

Towards the end of the working lives of the type they became very elusive beasts where passenger trains were concerned and it was not uncommon for a quantity of fast (and not so fast!) cars to be driven for sometimes hundreds of miles for a train journey behind a class 25 (or a pair of them as was more commonly the case) of only 15 miles!

The last special charter train to be hauled by 25s was on 28th September 1986 and the day ended at London's Euston Station where the 'seminar' photograph (below) was taken. (Er, I'm the one on the extreme left!) 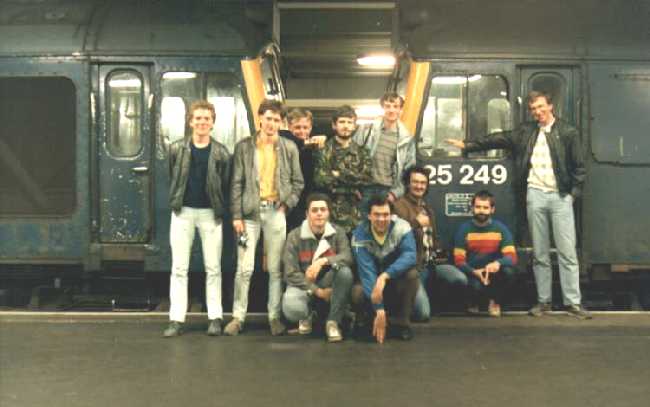 Well, we all thought the last charter train was then! In 1990 Members of the Roadshow, getting used to retirement and all that, were in action when 25322 was permitted to run on the main line again. Here it is at Leeds on 24th February 1990 paired with 47422 on the 0825 for Carlisle. in true time honoured tradition (for us!), a pair of 26s were also out on the first train from Carlisle which caused the usual quandries! 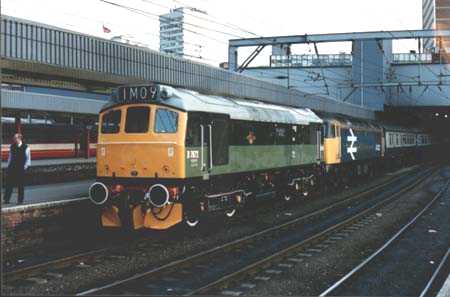 As they say "All good things must come to an end" and so they did where 322 was concerned with the running of "The Rat Reqiuem" on 30th March 1991. Here is the little Sulzer on the return run from Holyhead to Leeds during a stop at Bangor. Who knows, maybe a couple of 25s may be certified for main line use again, although I'm sure the Rat Roadshow aren't holding their breath! 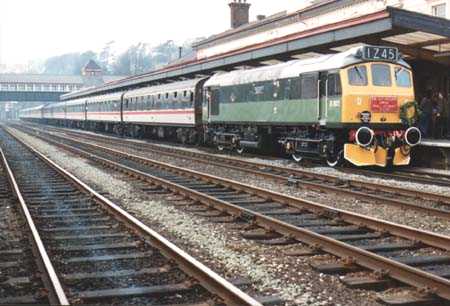 The Roadshow still perform every now and again on preserved railways, well the mileage is there for the taking! Here's a lovely view of D7629 (better known as 25279) on the Llangollen Railway pausing at the incredibly picturesque Berwyn station.

Or HERE for the re-launched Roadshow Site!