The epitome of Bristol ruggedness, the MW (Medium Weight) chassis was equally at home on local stage carriage or continental touring use. The MW was only available with a Gardner 5 or 6 cylinder diesel engine making them incredibly economical vehicles. The MW was produced from 1957 until 1967. Many vehicles which had started life as express coaches were kept on and fitted with bus seating. 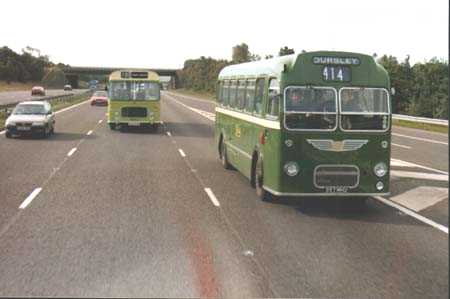 Firstly (above) 357 MHU which was new to Bristol Omnibus Co. Ltd. is seen on the M1 Motorway about to be passed by NHB 190M which is a RESL6G originally operated by Merthyr Tydfyll (which I've probably spelt wrong........oh well!). This picture was taken from the rear of another MW, FHW 156D. Again new to Bristol Omnibus this vehicle was used in the famous Bristol Greyhound coach fleet. Along with other members of this small batch the vehicle took part in the opening parade on the original Severn Bridge. This was re-enacted some thirty years later during a ceremony to mark the completion of the New Severn Crossing. The vehicle is seen below and on the left, reunited with FHW 154D for the day. 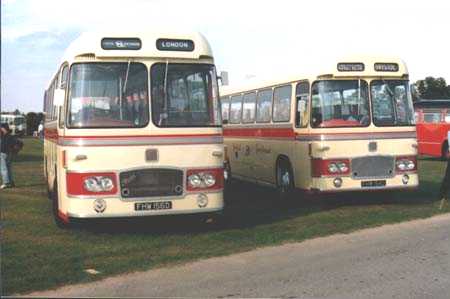 Next is an example of an MW which lost it's dual purpose seating upon downgrading to bus status. This particular example, 157 BRP of 1962 was new to the United Counties Omnibus Co. Ltd. It is currently being restored into National Bus Company leaf green livery. 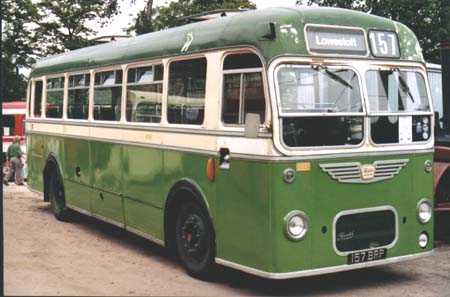 Click HERE to return to the Bristol Gallery Index Page