The original plans for this event rendered it a no go area where Sulzer Type 2 mileage is concerned. Although the railway have a resident Class 25 (059) it would have been running alongside visiting devices from a certain railway in Derbyshire.

Virtually at the last minute said devices were forbidden to travel to Keighley which left the KWVR in a slightly awkward position. Contact was then made with the very sociable Bo'ness Railway and arrangements were made for three of their fine collection to visit the event. As Direct Rail Services (DRS) were sending three of their own fleet this made the movement of the Bo'ness trio a lot easier.

The locomotives from Bo'ness consisted of the superstar 25235, the very nicely restored 26024 and the one time derelict (at Inverness Yard) 47643.

All of a sudden the weekend had the makings of quite an historic event as 25059 was itself a Scottish Region machine - what a splendid re-union, especially for 25235. It did seem unfortunate that the 25s were only paired up during Saturday for almost one round trip. They did look the part though.

Saturday evening saw the operation of a special beer train. This was booked to be 47643. Lengthy discussions took place during the afternoon the upshot of which was the provision of the loudest locomotive present for the train - 25235. This commendable move was obviously popular as very few (if any!) windows in the leading three coaches were minus people looking out and sampling the totally outrageous sound of 235.

The 20:00 out of Keighley operated non-stop to Haworth providing almost nine minutes of full power!

It can be safely said that had the 47 worked the beer-ex many people would have gone home, full marks to those involved for taking the initiative - one phrase summed the situation up to perfection -

Everything ran well on Sunday, although the 25s did not meet it was possible to arrive at Oxenhope on 235 for 059 back again. 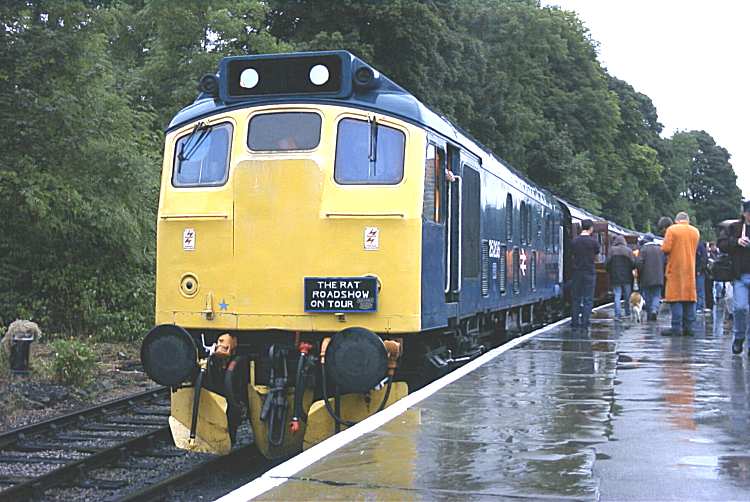 A familiar environment for a series 1 bodied Class 25 at Oxenhope with a far from familiar example of the type as 25235 stands in the platform after arrival from Keighley. During Saturday 235 was paired with 059 for almost one round trip - the first time two series 1 bodied examples have worked a train since the 1980s!!

A detailed view of that headboard. Underneath the badges is '84' - the board was made in February 1984 at Derby Locomotive Works and frequently appeared on services between Shrewsbury and Aberystwyth during that year - signwriting was never one of my stronger points but who cares?!!