The summer services along the Cambrian during the 1983 season were, unfortunately, beset by numerous locomotive failures. Generally the one working locomotive of the pair would haul both its failed classmate and the train. However, if a serious enough fault occurred the errant locomotive would be detached from the train. By this time the 25s were not being treated to expensive repairs due to their planned demise from British Rail and many were well overdue an overhaul in the workshops (then British Rail Engineering). A sign that things had gone wrong was always the very late running of the train and it's eventual appearance with just one locomotive in charge. Seen below is 25211 arriving at Wolverhampton having lost it's partner some considerable time beforehand. 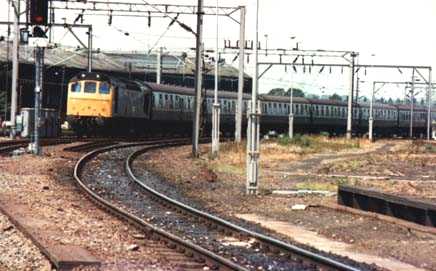 Staying in 1983 25322 leads 25277 into Machynlleth with the 1400 Aberystwyth - Shrewsbury service of 9th July 1983. Interestingly 25322 was allowed to run on the main line again in 1990, roughly three years after the class had been phased out. 322 went to Holbeck depot in Leeds for apprentice training purposes and in the process it was tastefully restored into two tone green livery and given it's old running number of D7672. Ironically 322 never carried this livery as it entered service in 1967 painted blue! It is often overlooked that the locomotive's first passenger working as a technically preserved example on 24th February 1990 paved the way for the return of other preserved locomotives to the main line from 1997 onwards. 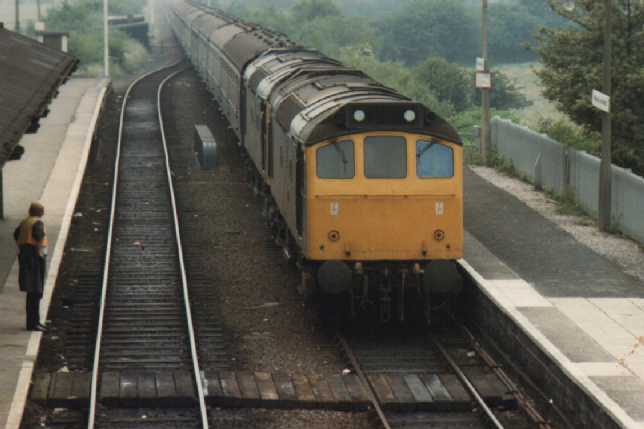 3rd September 1983 saw the very last service train of the year hauled by 25s arrive at Aberystwyth. A lot thought that this would be the last ever, especially given the reliability problems; fortunately the 1984 Summer services were 25s, the less said about 1985 onwards the better!! 25200 and 25212 are pictured (below) after their arrival at Aberystwyth with the 1010 service from London Euston. The locomotives were detached at this point to run round the train before reversing all the way into the station to form the 1715 to Shrewsbury.

Notice the repair to the front of 25200 (platform side) consisting of a piece of plate welded over where a hole was in the cab front. After a minor collision a visit to Derby Locomotive works took place. The buffer beam had been slightly bent, this was straightened out by attaching numerous chains and pulleys to both the buffer beam and workshop pillars! 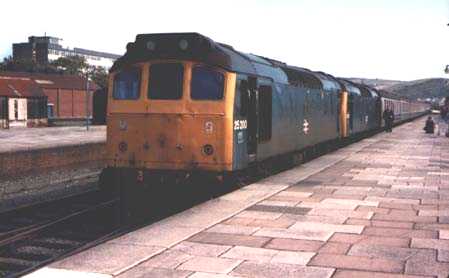