From an original photo by G Morris

The following delightful story about D5000 is from the late Ian Mellor who wrote:-

It was early Spring 1958 and D5000 was standing there already wheeled on middle road New Work section No 3 bay No 8 Shop, but no power unit yet ????

I was situated in the Planning Office, which was on the second floor of the Staff Offices, and was the Progressman for the Bo.Bo,s, it was my morning cuppa time, and enjoying the rest after chasing around the works for bits and pieces to feed that "monster" in 8 shop (working hours being 07.45 to 5.30 with one hour for lunch in those halcyon days).

Then I had the "call" from up high, Mr Herbert Mear the Deputy Works Superintendant sent for me, he said would I go to Friargate Station, Derby, as there was a large wooden crate on a wagon addressed to Mr T.B.F. Simpson Works Superintendant, Derby Loco Works, and as Mr Simpson was not expecting a delivery of a wooden crate, and secondly the wagon the crate was on was blocking up the Goods Yard,at Friargate and the parcels lorries were being held up from their local deliveries.

So off I trotted, across the Staff footbridge to catch a trolley bus to the town centre, and then a nice pleasant walk to Friargate Station, arriving there I contacted the Station Master, who got one of his staff to guide me to this large low loader wagon on which was perched this gigantic wooden crate made of 4"x2" planks, it had a pointed roof covered with roofing felt, looking more like a garage for a car, on closer examination I was able to ascertain it was from Sulzer Bros, Winterthur ,(of course in it was the power unit for D5000.)

I said that Mr Simpson did not want it delivered to his home, but I would be grateful if they could send the wagon to Stone Pit sidings at the loco works. There was it seemed to have been a breakdown in communications, only to be expected with the "First off" I suppose.

There was of course keen rivalry for the wooden crate, as it was non returnable, and ideal as a quality garage, one man did win the tussle and got it shipped home.

Those were happy days.

Here is an official works photograph of D5000 then still in undercoat. The view was taken at the north end of 8 shop 3 bay near to where the (then) diesel test house was situated. Ian is standing on the back row directly underneath the two visible body side steps, to his left on the front row holding a trilby with clasped hands is Mr TFB Simpson (Works Superintendent) whilst the man seemingly standing to attention underneath the loco number is the resident engineer from British Thomson Houston (BTH) who supplied the electrical equipment for the 24s.

It would be very interesting to find out any other names of those present.

The edge of the track had been painted white for the occasion and the photograph was taken using a plate camera. Ian says it was always quite an occasion when the official photographer appeared as they eventually disappeared underneath a sheet for what seemed like hours while they fiddled with the focus by which time not many people were saying 'cheese' any more!

D5000 once finished initially undertook the standard test run for new and overhauled steam locomotives leaving Derby at 06:00 and running to Toton via Spondon.

A big thank you to Ian for a treasured insight and for very kindly loaning his copy of the official Works photograph. Sadly Ian passed away during May 2007.

To this day it is a great shame D5000 was rejected by the National Railway Museum (to whom British Rail offered it) in favour of a "privately" built type 2 locomotive which turned out to be a Brush built Class 31.

D5000 ended its days at Swindon Works where it was scrapped in April 1977 having been taken out of traffic during January 1976. 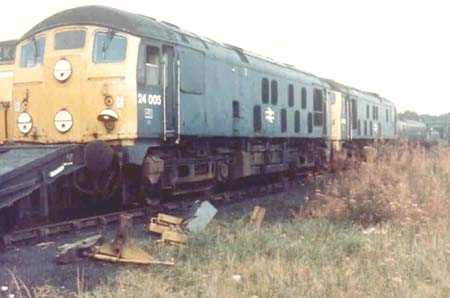 Four Class 24s survive in preservation including  D5054 (later 24054) seen here at Embsay on 30th May 2004 whilst on loan from its base at the East Lancashire Railway.

Return to the Works Index Page